From Daredevil to Batman: Ben Affleck to don Batman’s mantle 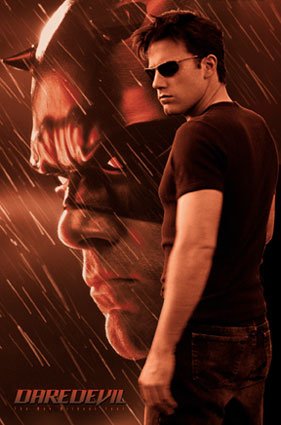 The internet in the last few hours has been bursting with it.  The news that Ben Affleck is going to be the next Batman alongside Henry Cavill’s Superman.  To get a better idea of how this will go, I just rewatched Daredevil.

That’s right, I rewatched Daredevil to see Affleck’s first attempt at superherdom.  The film had some feeling of The Crow.  Of Tim Burton’s Batman.  Occasional wire work of a cheaply done 80s Chinese movie.  Overall, it doesn’t actually start off badly.  Gave information on who he was as a kid, and a slight idea of how and why he is able to do what he does.  The end kind of spiraled away (really it started around the 35 minute mark), but that’s besides the point.  This isn’t a review for or against Daredevil.  I rewatched it simply to take a look at Ben in the role of a super hero.  How he did in his first go at it, to get a better idea of how he’ll probably do as Batman.  Not a bad comparrison to look at either, for in some sense Daredevil and Batman are similar characters.

No matter what you think about the film, Affleck actually does a rather good job.  He worked with what was given to him, and for the most part it was good.  He moved well for action scenes, especially in one of the starting fights at the night club.  His Murdock side was a little weak, but nothing horrible.  And considering how he’s done in films in the last ten years, well I think he could do rather well with the dual persona of Bruce/Batman.  Sure, a look at his films since Daredevil don’t show a lot of high ranking movies where he got to show a lot of skill in.  However there are two very recent ones that do stand out: The Town and, more so, Argo.

Its a shame Bale decided not to put on the mantel again (which some rumors had it would have given him 50 million for one film).  Bale would have allowed Man of Steel (and possible Justice League or Trinity) to tie into the beloved Nolan series while not having to reboot Batman.  Of course, they could just ignore rebooting Batman anyways like the earlier films did once Keaton didn’t return.

Either way, I think Affleck will do a good job in the role.  Really my biggest concern isn’t for the failure Daredevil is viewed as.  Or that Affleck only has two movies that really show off what he’s capable of as an actor.  A bigger concern for me is that Affleck is 41, Bale is 39 now and was 31 when Begins came out.  While it will work better if they do tie Affleck’s Batman to Nolan’s films to help count for his age, if they plan to reboot Batman completely for this I think Affleck at 41 could be a hurting factor.  More so depending how long he’ll go in the role of Bruce/Batman.  After all, Dark Knight Returns by Frank Miller has Bruce only 14 years older than Affleck is now.  If DC continues on with new Batman films, or at least more films that will have Batman in it, he could easily be nearing the age of Miller’s DKR Batman while in the role…

3 comments on “From Daredevil to Batman: Ben Affleck to don Batman’s mantle”